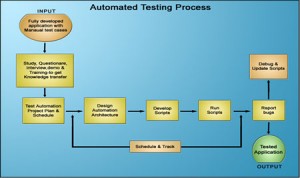 Automated testing is a valuable tool that provides us with additional ways of getting to the heart of the problem. . Manually testing is a time consuming practice and is difficult to repeat. Using test automation tools to write programs that simulates thousands of executed commands in the same exact order. Each time that your software does not perform to your specifications, the program will record the exact command that caused the problem. Once you thought you fixed the problem, you could then run the very same set of commands to see if, in fact, you were successful.

Automated testing can supplement the manual testing process and provide valuable insight in a speedy, objective way. Our engineers are certified in the use of sophisticated automated testing tools designed to create a repetitive and controlled testing environment. Use of these powerful testing tools means that our engineers can create automated test scripts that mimic the very same user interface over and over, thereby limiting the amount of "manual" testing necessary.

Training the resources in both manual testing and automated testing tools has enabled the client to utilize the same resources for both types of testing.

© 2023 Paradigm Infotech. All Rights Reserved.
Back to Top